Rules of the Game

Hex KB is a two player game, played on the board shown in Figure 1. There are two red border segments, two blue border segments, and a "portal" (explained below) highlighted in green. The two players, designated Red and Blue, take turns claiming unoccupied cells on the board, one cell per turn, by adding stones of their own color to the board. 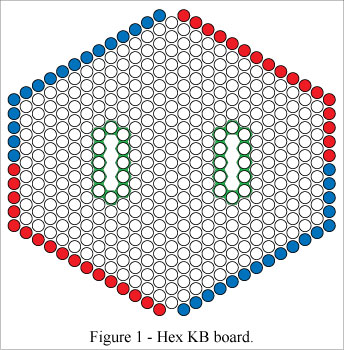 [Technical note (totally non-essential for learning the rules of the game):  The "KB" stands for Klein bottle, an unusual, four dimensional shape. The Hex KB board is a Klein bottle, or more precisely, a Klein bottle with a hole in it. The hole perimeter is divided into four segments, alternating in color between red and blue, and is stretched outward, flattening the Klein bottle and forming an outer perimeter.  The topology of Hex KB is investigated in Hex KB Topology.]

In Figure 2 Red claimed the first cell of the game - a single cell represented by two red stones. Now it's Red's turn to claim another cell. 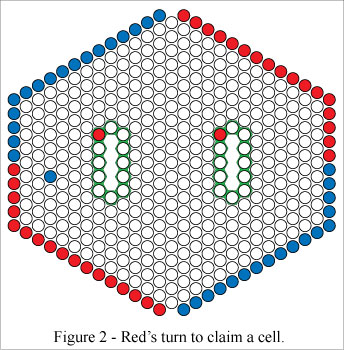 SIMPLE CONNECTING PATH
A path of like-colored stones that connects the two border segments of the stones' color, and which doesn't pass through the portal is a "simple connecting path". See Figure 3. 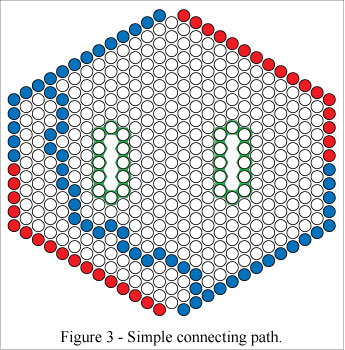 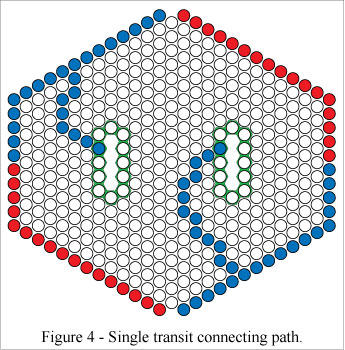 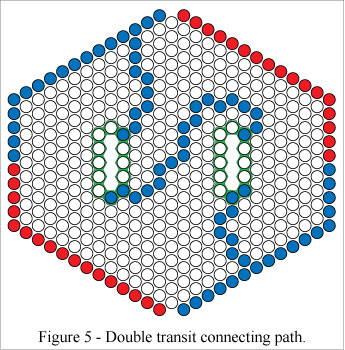 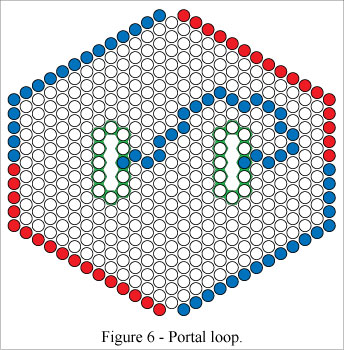 BORDER SEGMENT CELLS Cells in a border segment can be used as part of a path of stones which are the same color as the border segment. 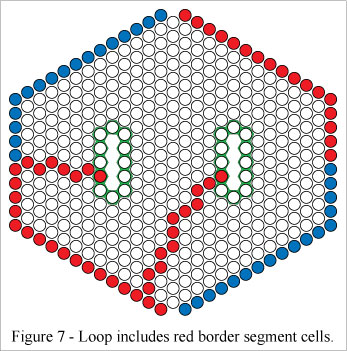 OBJECT OF THE GAME

To win, you must meet at least one of the following three criteria:

1. SIMPLE CONNECTING PATH
Red has won with a simple connecting path in Figures 8a and 8b, passing through the portal net zero times in both cases. (The blue stones have been omitted for clarity.)

2. PORTAL LOOP AND SINGLE TRANSIT CONNECTING PATH (TWO PATHS TOTAL)
Red has won with a portal loop and a single transit connecting path (two distinct paths) in Figures 9a and 9b.

3. DOUBLE TRANSIT CONNECTING PATH
Red has won with a double transit connecting path in Figures 10a and 10b.

Hex KB has an interesting geometric property. If the board is completely filled with red and blue stones (in any proportion of red stones to blue stones), there will always be a winning solution in one color but never in both colors simultaneously. See if you can determine the winning color in Puzzle A. 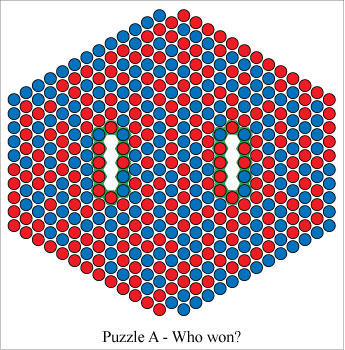 Feel free to publish this rule sheet, and to program the game of Hex KB for online or offline play. No licensing fee or royalties are expected. However please don’t change the name or the rules, and please attribute the game to me, Mark Steere. My other games can be found at marksteeregames.com.